This system works by harnessing the energy of the sun through photovoltaic modules. These modules are made up of a set of interconnected cells which use sunrays to transform them into electric energy.

In order to use this energy, an inverter transforms direct current into alternating current, which is used in most residential spaces. The inverter is connected to a power grid controlled by the Comisión Federal de Electricidad (CFE). CFE installs a bidirectional meter, which quantifies the energy that is generated and consumed.

Energy consumed – Energy generated = Energy which will be billed by CFE 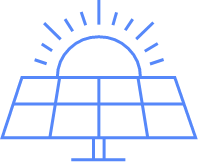